Blue Light at the Castillo?

First of all, I’d like to introduce myself. My name is Morganne and I have been a guide with Ancient City Tours and A Ghostly Encounter since 2008. It never ceases to amaze me the sheer amount and diversity of paranormal happenings in our old city. Last Saturday, May 11, 2019 I was preparing for another ghost tour just like any other Saturday. As with all of the other nights, you never know what to expect. I was thinking of traffic patterns, the size of my group, logistical routes and stories that would fit best. It always seems like the most miniscule, cracked, can’t-remember-stories seem to show themselves when you are least prepared. Then you are left to try and connect the pieces so you don’t end up looking like a fool in front of your thirty-some guests!

We got to the Castillo and I immediately noticed the grounds were very busy for that time of night. My guests were investigating in a few, well thought out spots, when a woman on my tour I came to know was from Kentucky came up to me and said “I don’t know if I got something in my picture, what do you think?” I glanced down at this photo taken only moments before and was met with bewilderment. What was this blue light I was seeing? I had gone over the happenings in the city ten times in preparation for my tour; surely I knew there was nothing going on at the fort tonight. There were no lights to speak of in this location, let alone blue lights- and nothing to reflect off of in mid air. “I don’t know what that is..!?” I replied. But I HAD heard of this blue mist before, and we were just about to divulge.

A tour guide I’ve known for many years, and one that still works with me today I’m glad to say, told me of a time he and another guide went out on the town to experience “spirits” of the other kind- he was successful. They decided to visit the Castillo at the almighty “bewitching hour”- admittedly, the same time as “last call”. They got to the fort grounds and began walking around, taking pictures, exploring on their own when something caught their eye. A blue light above the gun deck. They both confirmed with each other what they were seeing and it stayed around for long enough they both got spooked and headed for the hills (or in this case, the cab pickup location).

So was it THIS blue light that we captured above the fort, or maybe something else? It HAD been seen years before, and apparently has been seen again. Perhaps it is a Spanish soldier still running endless cannon drills who doesn’t know they’re gone. Or perhaps a prisoner making themselves known to anyone that will look. One thing is for sure, I definitely have another story to tell on my ghost tour. 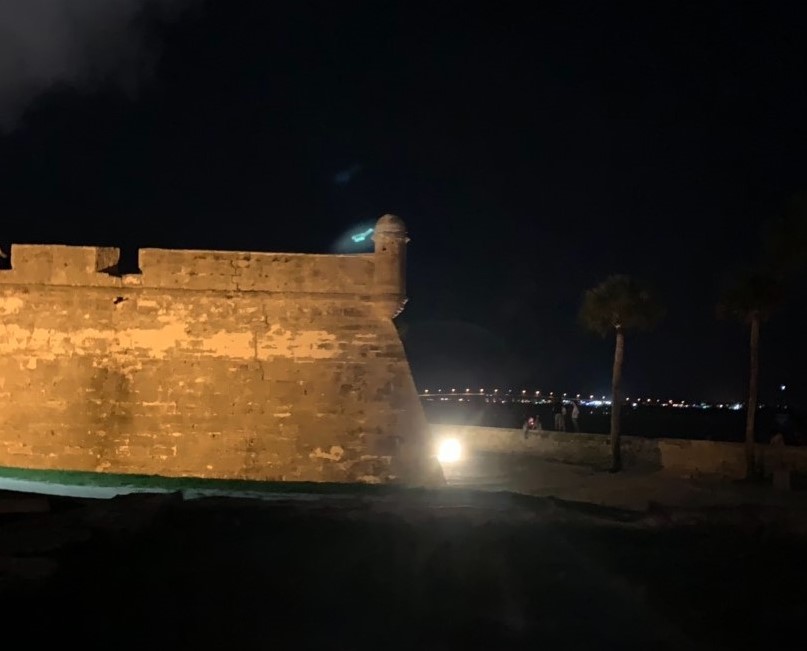