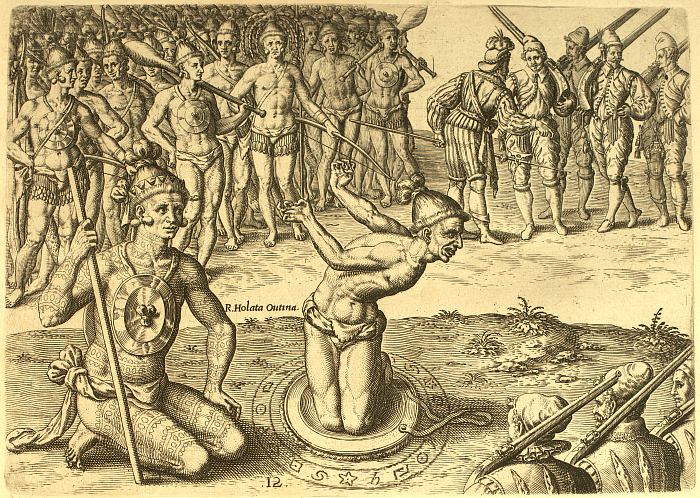 The Spirit of the Timuquans

Menendez landed at what has become St. Augustine, he was met by the Native Americans that had been here for at least 3,000 years at that time. They had their own culture and beliefs, and the Spaniards were the newcomers at the time. Imagine what it must have been like, you have lived and grown up in your neighborhood your whole life, you have learned all the stories and customs from your parents and grandparents, when a new neighbor moves in and wants and insists on changing everything? Imagine being the new neighbor that has just moved there, and here you are 1000’s of miles from home, months away, in a completely new land, with a different people who appear to be friendly, but they are vastly different from you! You cannot even speak to each other to begin with, yet the two must get along for survival.

Both the Priests of the Spanish, and the Shamans of the Timucua hold a similar rank or position, yet their stories and customs are vastly different, and they are both working to make the best answer for their respective people. The Timuquans had a deep spiritual belief in many things prior to the Spaniards arriving
according to writings by the Catholic Priests.

The Timuquans Shaman were believed to be able to have their spirit leave their body and communicate with other spirits, bringing back gifts, like super powers, and curses. To prove the Shaman were no ordinary men they often proved their abilities by contorting their bodies into positions that no one else in the tribe could do.

The Timuquans also believed that an owl carried special powers as they were
able to fly to the spirits. If an Owl looked you in the eye, ill fortune was coming your way. Same holds true if you startle or scare an owl. However if an Owl is not afraid and you hear it, then it is a good omen from the spirits it has visited and that the Gods and Demons have taken pity on you. If you came across a snake it always meant bad luck.

There are people who live in the North and Central Portions of Florida today that believe that the Timuquans cursed the land before battles with both the Spanish, and other Native Tribes, by having blood sacrifices on the grounds before battles which would curse the enemy. Some believe to this day that those blood curses still exist and explain some of the mass murders and serial killers that have come from, and operated in that area to this modern day.

Ghosts/Spirits obviously go back the earliest beginnings of mankind and their ability to think and reason no matter where they originated from. More next week… Jim